The drinks are on us as you join world-renowned mixologist and raconteur Anthony Caporale for a boozy romp through the history of spirits and cocktails in this critically-acclaimed, smash-hit musical comedy with drinks! Three complimentary craft cocktails are included!

The Imbible sweeps audiences along a 10,000-year journey through history and across the globe accompanied by craft cocktails and the vocal stylings of The Backwaiters acapella group! Sit back and enjoy the music and drinks while Anthony holds forth on the history and science behind alcoholic beverages, traces their economic and political impact on our cultural development, conducts live demonstrations of brewing beer and distilling spirits, and – like any good bartender – keeps his guests laughing throughout the night! Combining Anthony’s encyclopedic knowledge of beverage history and decades of bartending experience with his legendary skills as a storyteller and entertainer, The Imbible treats audiences to a completely original and thoroughly enjoyable evening of immersive theatre utterly unlike anything they’ve ever experienced!

The hit Off-Broadway musical comedy … with cocktails – now in its second smash year!

“One of the five best things to do in New York City!” - NewYork.com

Want to book The Imbible? 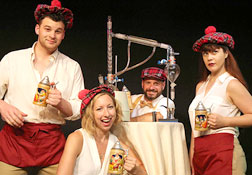