Anthony Caporale is a true pioneer in the beverage world, internationally known for being the first to bring mixology to both YouTube, with his seminal web video series Art of the Drink TV, and then to the New York stage with his groundbreaking Off-Broadway musical comedy series, The Imbible. During the more than two decades of his career, Anthony has also served as the Beverage Manager for Bobby Flay’s flagship Mesa Grill restaurant, the Launch General Manager of Forty Eight Lounge in New York City’s Rockefeller Center, and he’s been retained as a Management Consultant for numerous other bars and restaurants.

In addition to fixing struggling restaurants and bars, Anthony is the Director of Beverage Studies for the Culinary Management Program at New York City’s award-winning Institute of Culinary Education. He has also served as the U.S. Brand Ambassador for Drambuie® Scotch Liqueur, the U.S. Cocktail Ambassador for Truvia® Natural Sweetener, and the Managing Editor of Chilled Magazine, one of the leading trade publications for cocktails and spirits. Anthony is also a popular speaker at cocktail shows and industry conventions such as The Manhattan Cocktail Classic and Portland Cocktail Week, and he is a favorite guest on many TV and radio shows including The Dr. Oz Show, The Better Show, and FOX Money.

Additionally, Anthony has spoken as a whisky expert in the Talks at Google lecture series, and he has appeared in a number of national television commercials including as a judge in The Food Network’s Chopped: Open Basket series and as a Chef Instructor in KitchenAid’s Diamond Blender commercials. Working with IBM’s Watson supercomputer, he created the cocktail recipes for the groundbreaking cookbook, Cognitive Cooking with Chef Watson: Recipes for Innovation from IBM & the Institute of Culinary Education. In 2008, Anthony was commissioned a Kentucky Colonel by Governor Steven L. Beshear for his work promoting and educating consumers about Bourbon. 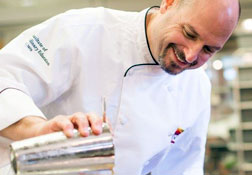